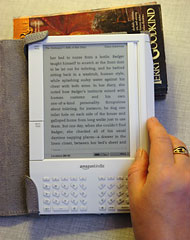 Even authors who were once wary of selling their work in bits and bytes are coming around. After some initial hesitation, authors like Danielle Steel and John Grisham are soon expected to add their titles to the e-book catalog, their agents say.

“E-books will become the go-to-first format for an ever-expanding group of readers who are newly discovering how much they enjoy reading books on a screen,” said Markus Dohle, chief executive of Random House, the world’s largest publisher of consumer books.

Nobody knows how much consumer habits will shift. Some of the most committed bibliophiles maintain an almost fetishistic devotion to the physical book. But the technology may have more appeal for particular kinds of people, like those who are the heaviest readers.

At Harlequin Enterprises, the Toronto-based publisher of bodice-ripping romances, Malle Vallik, director for digital content and interactivity, said she expected sales of digital versions of the company’s books someday to match or potentially outstrip sales in print.

Harlequin, which publishes 120 books a month, makes all of its new titles available digitally, and has even started publishing digital-only short stories that it sells for $2.99 each, including an erotica collection called Spice Briefs.

Perhaps the most overlooked boost to e-books this year — and a challenge to some of the standard thinking about them — came from Apple’s do-it-all gadget, the iPhone.

Several e-book-reading programs have been created for the device, and at least two of them, Stanza from LexCycle and the eReader from Fictionwise, have been downloaded more than 600,000 times. Another company, Scroll Motion, announced this week that it would begin selling e-books for the iPhone from major publishers like Simon & Schuster, Random House and Penguin.