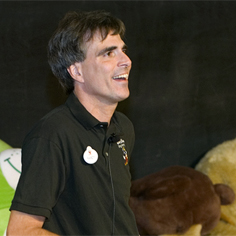 Randy Pausch, the professor at Carnegie Mellon University who inspired countless students in the classroom and others worldwide through his highly acclaimed last lecture, has died of complications from pancreatic cancer. He was 47.

Also a Carnegie Mellon alumnus, Pausch co-founded the Entertainment Technology Center and led researchers who created Alice, a revolutionary way to teach computer programming. He was widely respected in academic circles for a unique interdisciplinary approach, bringing together artists, dramatists and designers to break new ground by working in collaboration with computer scientists.

Outside the classroom, he gained public fame for delivering what would come to be known as “The Last Lecture.” On Sept. 18, 2007, only a month after doctors told him that he had three-to-six months to live following a recurrence of pancreatic cancer, he presented a lecture called “Really Achieving Your Childhood Dreams” to a packed auditorium at Carnegie Mellon.