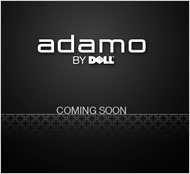 When Apple released the MacBook Air, someone viewed the sleek notebook as an opportunity to make fun of clunky, old Dell on YouTube with a parody ad. But what if Dell is about to have the last laugh in the ultra-light laptop race?

A recent dig through Dell’s trademarks turned up a couple of curiosities – “Adamo” and “Adamo by Dell.”According to the documents, the trademarks cover computer hardware, including possibly desktops and laptops.

The whole “Adamo by Dell” bit sounds rather fancy for a company that lumps all of its computers under just a handful of brands. But, apparently, this computer isn’t your regular Dell computer. It has its own Web site after all, which says the product is coming soon.