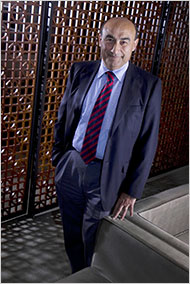 About three months ago, Gianfranco Lanci flew into San Francisco International Airport, got off the plane and made his way to the passport control stations. As he pulled out his documents, the passport agent immediately recognized him as the chief executive of Acer. “It was the first time in my life that has ever happened,” he says.

Mr. Lanci may need to come to grips with his growing celebrity. After all, he has turned Acer, the personal computer seller based here, into a finely tuned organization that’s obliterating some of the computing industry’s longest-standing traditions and leading Taiwan’s charge up the technology food chain.

This year, Acer appears poised to overtake Dell as the world’s second-largest seller of personal computers, which would put a real dent into one of America’s favorite dorm-to-empire business stories. And if this comes to pass, Acer would trail only Hewlett-Packard; no computer company based outside the United States has ever climbed so high.

“That is a big achievement, and they have beaten the odds,” says Roger L. Kay, a PC industry analyst and president of Endpoint Technologies Associates, a consultancy. “Acer is a real comer.”