Commuters have long relied on traffic sites to help them determine their last-minute path around poor traffic on the highway. But if the traffic looks bad on the highways, you’ll probably want to know how it looks on the alternate routes through arterials. I usually would just guess that the traffic on back roads is light, but with this new launch the guesswork is eliminated: Google Maps will now show you live traffic conditions on arterial roads in selected cities. Just zoom-in on the city you’re interested in, and click the “Traffic” button in the upper-right corner of the map. As you zoom in closer to an area of interest, we’ll color the arterial roads, in addition to the highways, to show current traffic conditions. Just as with the highways, the colors correspond to the speed of traffic (relative to the speed limit of the road): green is free sailing, yellow is medium congestion, red is heavy congestion, and red/black is stop-and-go traffic. For example, here’s how traffic looks near the Google Seattle office today.

Here are some examples of what you can find out with this new feature: 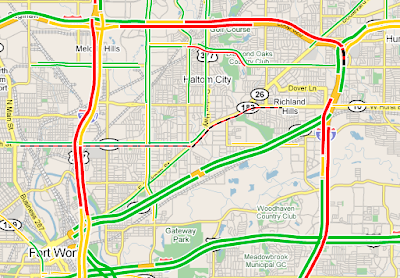