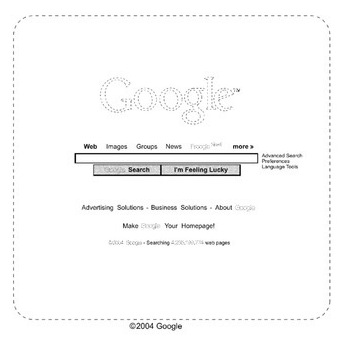 After a five-and-a-half-year fight, Google and its attorneys have managed to convince federal bureaucrats to bestow a patent on the company’s iconic home page. We always thought the page was brain-dead simple, but apparently it’s an innovative “graphical user interface.”

Google had more luck patenting the design of its search results, which were submitted along with the home page in early 2004 cleared the U.S. Patent and Trademark Office at the end of 2006. The home page, in contrast, was split off into a separate application, receiving its design patent for a “Graphical user interface for a display screen of a communications terminal” just yesterday. The document (see below) is as minimalist as the interface, containing a single illustration of Google.com, with the company logo depicted in dotted lines to indicate it is not an integral part of the patent.

In other words, subject to how the patent is enforced, Google owns the idea of having a giant search box in the middle of the page, with two big buttons underneath and several small links nearby. Since the time of the patent application in 2004, the company has moved some links, for searching News and Groups and other alternate databases, from directly above the search box to the top of the home page. But Google presumably believes its patent is broad enough to cover the variation.