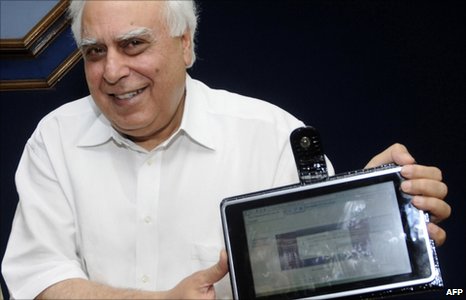 The Indian government has unveiled the prototype of an iPad-like touch-screen laptop, with a price tag of $35 (£23), which it hopes to roll out next year. Aimed at students, the tablet supports web browsing, video conferencing and word processing, say developers.

Human Resource Development Minister Kapil Sibal said a manufacturer was being sought for the gadget, which was developed by India’s top IT colleges. An earlier cheap laptop plan by the same ministry came to nothing.

The device unveiled on Thursday has no hard disk, using a memory card instead, like a mobile phone, and can run on solar power, according to reports.