The Times has lost almost 90% of its online readership compared to February since making registration mandatory in June, calculations by the Guardian show.

Unregistered users of thetimes.co.uk are now “bounced” to a Times+ membership page where they have to register if they want to view Times content. Data from the web metrics company Experian Hitwise shows that only 25.6% of such users sign up and proceed to a Times web page; based on custom categories (created at the Guardian) that have been used to track the performance of major UK press titles online, visits to the Times site have fallen to 4.16% of UK quality press online traffic, compared with 15% before it made registration compulsory on 15 June.

These figures can then be used to model how this may impact on the number of users hitting the new Times site. Based on the last available ABCe data for Times Online readership (from February 2010), which showed that it had 1.2 million daily unique users, and Hitwise’s figures showing it had 15% of UK online newspaper traffic, that means a total of 332,800 daily users trying to visit the Times site. 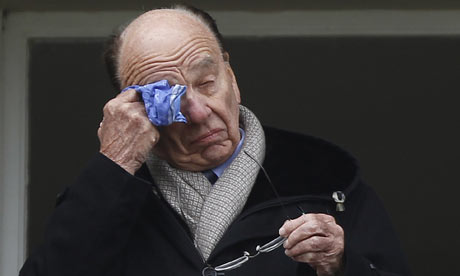 According to his biographer Michael Wolff, Murdoch has not used the internet, let alone Google (he only recently discovered email) and so he cannot possibly understand the dynamics, demands and opportunities of our post-industrial, now-digital media economy. I use the internet and teach it and write about it and I still can’t grasp the complete implication of the change. I don’t think even Google can.

The Times and Sunday Times newspapers will start charging to access their websites in June, owner News International (NI) has announced. Users will pay £1 for a day’s access and £2 for a week’s subscription.
The move opens a new front in the battle for readership and will be watched closely by the industry.
NI chief executive Rebekah Brooks said it was “a crucial step towards making the business of news an economically exciting proposition”. Both titles will launch new websites in early May, separating their digital presence for the first time and replacing the existing, combined site, Times Online.