The day started this morning at 08:30, with Pirate Bay founders Gottfrid Svartholm Warg (aka Anakata), Peter Sunde Kolmisoppi (aka Brokep) and Fredrik Neij (TiAMO) arriving at the court with the S23K bus. The bus will operate as their press-center in the weeks to come. Outside the court were several Pirate Bay supporters waving Pirate Flags. 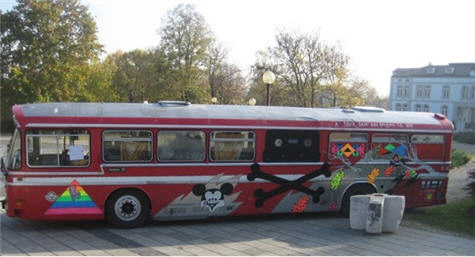 The trial began roughly half an hour later. Prosecutor Håkan Roswall read out the charges that can be best summarized as “commercial copyright infringement”. The plaintiffs are Warner Bros, MGM, EMI, Colombia Pictures, 20th Century Fox, Sony BMG and Universal. Lundström’s lawyer pointed out that the prosecutor may have drawn up some charges incorrectly. Interestingly, Lundström is the only one of the defendants with two lawyers, one of which is a copyright expert.

Fredrik, Gottfrid and Peter stated their defense. They all pleaded not guilty.