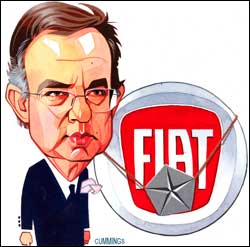 In an industry split between bean-counters and petrolheads Sergio Marchionne, Fiat’s boss, falls into the extreme fringe of the second category. In addition to a collection of Ferraris, he owns an Alfa Romeo 8C, and a Maserati Quattroporte, a Fiat group model that he drives when in Turin. One anagram of his name is “his car engine room”.

Like other senior business leaders in Italy, Mr Marchionne travels with an armed police escort, which he ditches when he reaches the Swiss border heading to Montreux, where his wife and two young sons live. At auto shows, while other chief executives are promoting their own vehicles, he can be seen studying the cars of rivals such as Audi.

So it shook the automotive world this week when Mr Marchionne unveiled a strategic alliance with Chrysler, which few would regard as the industry’s hottest nameplate. The market gave a distinctly cool response to the news that one of Italy’s largest industrial groups and steward of most of its best-known car brands was marrying its fortunes to the Detroit-based producer of mini-vans and sport utility vehicles. Chrysler is in effect a ward of the state and in business thanks to a $4bn (€3.1bn, £2.9bn) emergency government loan.

By the end of the week, when Fiat unveiled downbeat financial results, Mr Marchionne sounded tired and tetchy from arguing the benefits of the agreement to a financial community wary about the drain on finances and potential for culture clashes that marred Chrysler’s nine-year merger with Daimler, and Fiat’s shorter dalliance with General Motors. While touting the agreement’s ability to build scale and launch Fiat into the US, where it currently sells no cars under its own brand, he acknowledged: “We need to ensure that whatever is good in Fiat is preserved.”

Yet for followers of Mr Marchionne’s views of the industry, the tie-up made more sense. The 56-year-old manager has long drawn a line between his own passion for cars and his distinctly cooler take on the automotive sector’s ability to generate sustainable shareholder returns. A trained accountant and solicitor, he does not belong to the cadre of industry bosses who came up through carmaking. He took his first job in the industry when the Agnelli family plucked him from SGS, a Swiss services group they have a stake in, to run Fiat in 2004.

Before the financial crisis hit last year, he considered spinning off Fiat’s auto business from its more profitable (if less sexy) farm equipment, truckmaking, and other divisions to unlock value for the Agnelli family and Fiat’s other shareholders. In agreeing to take 35 per cent of Chrysler, Mr Marchionne became the first car boss since the crisis began to forge what many predict will be the first of a string of alliances. More are in the offing, he hinted, including partnerships between European carmakers.

Should the alliance succeed, it would be a new success for Mr Marchionne, an outsider in the tight-knit and often uptight northern Italian business establishment. Though a native Italian – he was born in 1952 in Abruzzo, on the east coast of Italy, opposite Rome – Mr Marchionne is also a citizen of Canada. He moved there at 16 when his father, a former officer in the carabinieri, retired and opted to emigrate. He speaks Italian and English in flat, North American cadences, strewn with expletives and colourful turns of phrase. In a country known for its suits and studious business protocols, he wears pullovers and smokes at meetings. Alessandro Profumo, chief executive of UniCredit, the big Italian bank and a friend, notes: “Sergio is one of the most crazy guys I have met in my life: passionate and lion-hearted.”