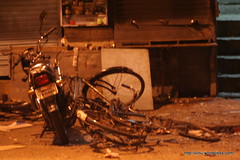 Forget CNN, which so far has few details of the ongoing attacks in Mumbai, India that have left at least 80 dead (Update: they’re starting to catch up now). People are giving first hand reports of what they’re seeing directly on Twitter. Flickr is another important information resources – images are here.

Twitter isn’t the place for solid facts yet – the situation is way too disorganized. But it’s where the news is breaking. GroundReport is doing a good job of aggregating citizen reports, and a Wikipedia page is being edited with the known facts so far.